Eleven of the sixteen most seriously injured tourists involved in a road accident on Monday February 24, were airlifted to hospital in Miami on Tuesday after treatment at the main hospital in Roseau, the Princess Margaret Hospital. The visitors arrived on a visiting cruise liner, the Celebrity Summit. 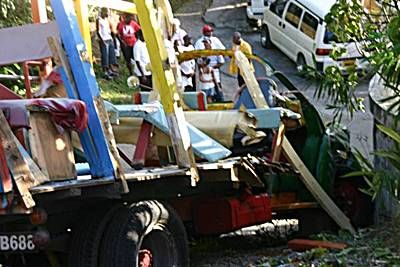 On arrival in Florida, most were taken to the Ryder Trauma Center at Jackson Memorial Hospital in Miami, where two remain in critical condition. All of those in the crash are thought to be from the U.S. One woman who came to South Florida from California to be with her sister, an injured passenger, said her sibling already had one surgery and was scheduled for another.

Angel Holguin said her sister talked about the crash. "She said it was like being on a roller coaster, she said the driver was just erratic," Holguin said.

The visitors were taking part in a Caribbean Cooking Adventure shore excursion, in which they joined local cooking experts to learn how to prepare traditional local Creole dishes.

Following their cooking classes, the visitors then embarked on a scenic tour of the island, taking them to the Emerald pool, the Trafalgar falls and other destinations. They were approaching the end of the tour when the driver of the truck they were driving in suddenly lost control and the truck careened into a wall dislodging most of the passengers in the process. They sustained injuries including broken bones, bumps, bruises and lacerations.

Ambulances and private vehicles worked their way through thousands of revelers to get the victims to the Island’s main hospital about twenty minutes from the scene of the accident.

The cruise ship remained in Port until late Monday night before continuing it’s journey. Meanwhile on Tuesday, members of Celebrity Cruises’ guest care team flew to Dominica to escort the most seriously injured and their traveling companions on the air ambulance to Miami.

Attention is being focused on the vehicle that was used in transporting the tourists. Dominicans remember the vintage Bedford trucks of the late 1960s and 1970s that was the preferred form of transportation for passengers moving to and from Roseau.

In fact it was a similar type truck that was involved in the country’s worst traffic accident in 1974 when 32 people lost their lives after the truck they were driving in plunged over a precipice.

In their heyday, these trucks were said to have a particular problem of ‘losing their braking control’ without too much warning. The driver has since confirm to the local media that his brakes 'gave way'. Now, people are asking why these relics are allowed to carry passengers around the winding Dominica roads.

This is the first such accident involving tourists in Dominica. Despite being narrow and winding, the roads in Dominica are considered to be among the safest in the world with an average of just two deaths per year for the last ten years.

Approximately 311 cruise ships are expected to call at Dominica during the 2008/2009 season, bringing nearly 500,601 visitors to the island.

E-mail to a friend


// posted by TheDominican.net @ 10:05 PM
Comments:
This post has been removed by a blog administrator.

We certainly pray for thier quick recovery!

Time they ban those trucks; fit to carry only bananas.

I think that Dominica roads needs to be wider and there should be bars along the sides of the road because there is a lot of dangerous valleys along the roads the road needs to be fix to ensure people safety there are a lot of people visiting Dominica and to ensure there safety something has to be done about the street first of all the bad area where you can see danger please put bars immediate so in case a driver looses control there is something to protect the vehicle from going down. Then stare expanding the street a lot of places is just to narrow we are talking about people life here if they don't take action now to ensure people safety people and tourist will stop come to Dominica and that will not be good we need people to come to Dominica it is a beautiful country.

I agree that this barbaric punishment should be ended

Thank you for a great article

Thank God because it could have been a lot worse. In evrything give thanks.

I pray for the speedy recovery of the injured and that our tourism industry will not be negatively affected as a result of this unfortunate incident. May God's grace cover the sick and May the Blood of His Son Jesus Cover our sweet island Dominica.
Considering our terrain, I think we have done well to keep safe overall, but am certain there is always room for improvement in regards to our infrastructural development. Let us wish DA the best.

Celebrity did a great job taking care of the passengers after the accident. I'm sure most of these passengers didn't have trip insurance, but Celebrity stepped up and should be commended.

Apparently, PMH did a superb job and they were recognised with a plaque by Celebrity Cruises...cuedos to PMH doctors and staff

Please Provide Opinions and Comments on This Article.